Does the world owe you something?

I love a good and respectful debate where people can share their views and really hear each other. This last week I engaged in a very long Facebook conversation with a friend of mine who has very different views from me. We kept the conversation going for awhile and then life took over and I had to turn my attention to other things. But one of the things he wrote really stuck with me. He wrote: “At the heart of this discussion [is an] erroneous assumption: The world owes you something.”  Not gonna lie that this statement stuck in my craw and got me all tangled up in knots. I spent a lot of time de-constructing the statement and assembling my response. And here it is:

“The world doesn’t owes you anything” is essentially what he was saying. So who is this “world” anyway? Our beautiful planet certainly doesn’t “owe” us anything. If anything, we owe it a massive debt for the ongoing rape and plunder of her beautiful resources and gifts. So if not the planet, who then “the world?” It feels like the mysterious “They” so often referenced. If we’re not talking about the planet, then we’re talking about people and what people do. So the statement then becomes “People don’t owe you anything.” We were having a discussion about raising the minimum wage among other things and he posited that it’s not up to the corporation to “take care of people.”  I take a different view that crafts a non-binary approach to employer/employee, corporation/people, us/them.

I believe in interdependence. Humans have survived all these many eons because we depend on each other and we care for each other – even while we’re busy killing and degrading each other, we’re also taking care of each other. Babies are helpless, elders need additional care, we help each other out to raise children, bring in the crops, build a barn, etc. To bring in the big game, men needed each other to share in the hunt to provide for the village. Women have always helped each other out because a woman with young children and no other women around is a woman not able to get much accomplished! Even today in this crazy Western world that so highly values fierce independent individualism, it is true that we still need each other. For friendship, support, fellowship and often for a helping hand.

So if you break down corporations, what are they but a conglomeration of people? Everyone clocks in, does their work and clocks out. Someone is programming the robots – nothing is so fully mechanized that people are obsolete. So corporations are really nothing but people. And those big executives at the very top who make 300 times more than the guy at the bottom are people too. Do they owe their workers anything? Yes, of course they do. People fought hard for reasonable work days, working conditions, and wages. And are still fighting apparently since there are people who work a 40+ hour week and still can’t afford a place to live or to meet their basic needs.

The theory of vulnerability says that instead of looking at the adult human – which in the USA is modeled on a white, Christian male – as a fully independent subject somewhat impervious to harm, we can look at humans as vulnerable along the course of our life spectrum and recognize that vulnerability is inherent in the human condition. When we do that, we see that “as embodied and vulnerable beings, we experience feelings such as love, respect, curiosity, amusement and desire that make us reach out to others, form relationships and build institutions. Both the negative and the positive possibilities inherent in vulnerability recognize the inescapable interrelationship and interdependence that mark human existence.” (from website)

And so just as we need others to bring us food when we have a new baby in the house, drive us to the polls so we can vote when we can’t drive ourselves, help unload the moving truck and stand with us at the grave when we mourn, so do we also need each other to do the business of work.  Humans are communal beings; we usually have people in our lives in multiple ways. We have – and need – social capital. Bowling Alone describes the decline in American communities and offers suggestions as to how to re-build it. It all comes back to interdependence. Until we recognize that humans are interdependent on each other for our very existence and that we have an interdependent relationship with the Earth, then we will skate along thinking that it’s “Every man for himself!” (And I mean every man because more women than not know the importance of community!) But we all truly can build a different relationship to each other, our work, our employees and to the earth. And when it comes down to it, “We all do better when we all do better.” And this, and this alone, might just possibility help our poor lost species survive.

So, does the world owe us anything? Well, now that we know that “the world” has no agency and can’t “owe” us anything then it becomes clear that it is the wrong statement. So I offer you instead this affirmation from the 1975 Declaration of Interdependence as a closing thought: WE AFFIRM that the exploitation of the poor by the rich, and the weak by the strong violates our common humanity and denies to large segments of society the blessings of life, liberty, and happiness. We recognize a moral obligation to strive for a more prudent and more equitable sharing of the resources of the earth in order to ameliorate poverty, hunger and disease.

(Thanks to my friend, T.G., who was the inspiration for this post. I loves ya even though we think so differently!) 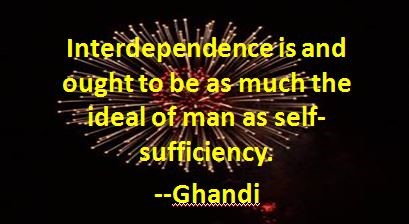