I recently heard two stories that, though centered in very different realities, were depressingly similar. One was in the non-profit realm, one was in the start-up realm. One involved a young man at the beginning of his career, the other an older man making a career transition. Their similarities? Both were let go within one to three months of starting their employment.

OK – sometimes it’s not the right fit. Whatever. But here’s the similarities: Neither employee was given the support, tools or resources to do their job well! Both companies invested money in their on-boarding – one got moved  across the country, one was flown to another city for training. Both had very extended hiring processes too. It took longer for these companies to hire them then it did to fire them. Once hired, it was sink or swim. Both companies shared the expectation that these employees should be able to hit the ground running and any learning curve or adjustment period apparently was unacceptable. One of the employees was told “I had to answer a process question from you more than once.”

Excuse me?? As anyone who has adjusted to a new position knows, the more questions and answers that are given and received, the likelier it is for employees to succeed!

The man in the start up was told: “Launch a new strategy for marketing to millennials” and was given absolutely no resources or support for collecting data, understanding who the company was or where it wanted to go, and had no support from the communication or leadership team. He was essentially asked to work in a silo and “Launch a new strategy!”

The primary similarity between these two companies is their lack of investment in employees. Their company cultures did not support grooming new employees for the positions for which they had been hired. Clearly both of these employees made the cut; they had the skills and talents to do the jobs but neither were given the resources and support to thrive.  The non-profit employee was actually unable to access the computer that had been provided to him because it had not been set up correctly. That left the employee scrambling to catch up as emails accrued and, instead of doing his job, he was online with tech support for hours on end.

Both of these employees are happier now that they are no longer with their companies. Both went through incredible stress trying to understand the systems and adapt to the culture and do the work for which they were hired. Each of them is pursuing different opportunities and are a bit wiser as to the environment in which they want but here’s the thing: It didn’t have to end this way!

Leadership means understanding how to set people up for success. It means clear processes, clear expectations and clear communication. It means helping everyone understand the relationships between teams and how everyone is needed to make a company thrive. It also means creating a welcoming environment for questions and interactions. I remember one job I had where I wasn’t even introduced to other employees on my first day and I was left to find my own way to the break room. Not a very welcoming environment!

It means taking the time to know your employees – where are they coming from? What are their strengths? What may be their challenges? And in the beginning, it means using the probation period as actively as possible. Welcoming all questions, immersing the employee into the flow of the company and setting them up for success. Not chastising them when they make a mistake on a database entry in their first weeks. Databases can be learned – the context and purpose of the data and the function of the company is the important thing to transmit in the early days.

So, two stories, two different worlds, two poor outcomes for both employees and companies. And the thing about it is that both of these experiences could have had different outcomes if there had been a little bit better communication and collaboration. So think about your company. Are people set up for success? Do they have what they need to thrive? Are they able to ask the questions to deepen their understanding and get the answers they need? If the answer is no then call me. I can help you solve that problem. And I’m willing to bet it will save you money in the long run! 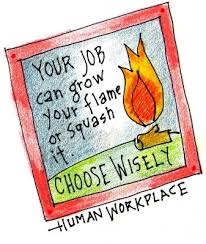